In Response to the Overturn of Roe v. Wade 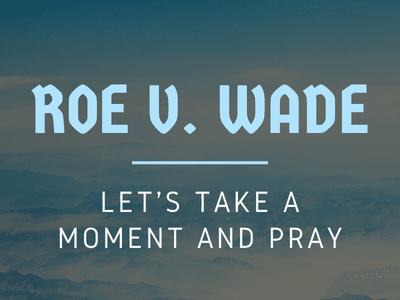 In response to the Supreme Court’s ruling to overturn Roe v. Wade, I’m sure that many of you have been shedding proverbial or maybe even literal tears over the weekend, whether tears of joy or tears of anguish. And I know that many people want the church to take a stand and choose a position on things like this, their own position, of course. And many churches have chosen to do this, quite certain that they are right on whatever the issue is, though generally alienating anyone who doesn’t see things the same way and sometimes turning them away from the church altogether. I guess they see that as acceptable collateral damage for being right.

What I keep asking myself is, is it more important to be right or to be like Jesus? Is it more important to confidently proclaim a very partisan position on things, usually contributing to the polarization, distrust, vindictiveness and even hate that is so prevalent in our society right now? Or is it more important to act like Jesus in the midst of a society that is tearing itself apart at the seams, and show the world around us the meaning of grace, compassion, forgiveness, forbearance, and humility, particularly when we are dealing with issues that are anything but black or white, despite each side’s bumper sticker-sized slogans that try to manipulate us into believing otherwise and despite each side’s claim to have God on their side.

Part of what made the early church so attractive and so indominable, despite its small size and great persecution, was that they became known, not for all their positions on issues, but for how much they loved, and not just one another, but anyone who was in need. They refused to operate according to the world’s definition of enemy and neighbor. Instead, they prayed for their enemies, for those who persecuted them, even those who killed them. They chose the way of Jesus.

In my opinion, one of great problems with the church in America is that we have forgotten the way of Jesus, probably because we decided it wasn’t effective enough to get things done. And so instead, we’ve chosen the way of the world, using any means necessary to try to win and clinging to our rightness at the expense of our unity and faithful witness to Jesus. This is true of both the liberal wing of the church and the conservative wing of the church.

What about IPC? Who are we going to be? Are we going to join the fray like so many other churches in America, picking up our proverbial weapons, choosing sides, and then going to war with one another? Again? Or are we going to keep our eyes fixed on Jesus and choose to love one another as Jesus loved us and demonstrate to the world around us a different way, the way of the cross, the way of Jesus? I know that this way often feels like losing in our world. But in reality, it is the only way that we will ever win.

So rather than reacting with cheering or outrage, perhaps we should all start by spending a good bit of time in prayer, praying for our country, praying for those who are writing and voting on laws, praying for those who are feeling hopeless and don’t know what to do about a pregnancy they cannot afford, praying for people and organizations that will provide care and support for families in crisis, praying for God’s will to be done on earth as it is in heaven. And perhaps we should spend more time listening to one another, for hearing another person’s story and learning where they are coming from can be such an eye-opening and transformative experience. It can certainly make us much more empathetic, compassionate, understanding and humble, maybe even a bit more like Jesus. And that, I believe, is the thing our world needs most from us all.