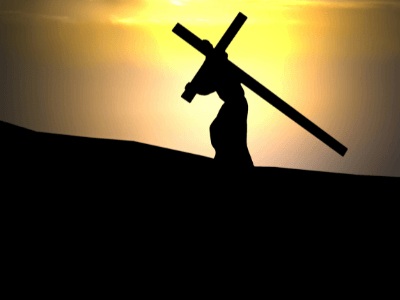 I'm sure that every one of us has been stunned and heartbroken over the war in Ukraine. Seeing the horrific pictures of the devastation and loss of life, it is hard not to feel hopeless about there ever being any real peace in our world.

I suspect that on Good Friday, Jesus' followers felt this same sense of hopelessness as they watched him being killed on a cross. He was their great hope for change, for an end to all the senseless violence that the Romans so often inflicted on the Jewish people. I'm sure that when Jesus died, all of their hopes for a better, less violent future died with him. From then on, it would surely just be more of the same. Of course, that was only Friday.

Perhaps some of you are familiar with the line that the great preacher, Tony Campolo, has made so famous: "It's Friday, but Sunday's coming!" This is one of the most succinct summaries of the hope that we have as Christians. It reminds us that no matter how bad things might seem in our lives or in our world, the story is not finished yet because our God is a God of resurrection. Of course, resurrection doesn’t happen until after all of our hopes have been buried in a tomb.

In the late 4th century as the Roman Empire was collapsing, things were extremely bleak for the people of Antioch. Conditions were terrible. There was starvation and rioting.  And the people began to lose all hope, sure that things would never improve. But in his Easter sermon, their pastor, John Chrysostom, said to them, "Your resignation assumes that God is dead. Do not be so certain. He who has embraced death, has defeated its power over us. He who went down to hell, liberated every city held captive by hell’s despair. Christ is risen! Open the doors of your comfortable despair that the great storms of hope may blow life into us once again."

Right now, many of you may be held captive by hell's despair, whether because of the war in Ukraine or because of something difficult happening in your own life, and hope may be hard to come by. But that’s only Friday talking. The story is not over yet. The one who conquered death itself is still on the move, bringing new life and new possibilities in his crucified hands. So "open the doors of your comfortable despair that the great storms of hope may blow life into us once again." After all, Sunday is coming, and not even the gates of hell can stand against it!