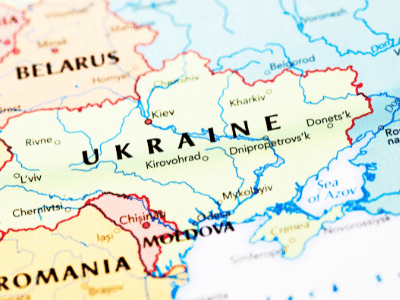 Dr. Michael "Mike" Fleenor, an IPC church member who formerly served as the Health Officer for Jefferson County at the Public Health Department, and I went on a “scouting” trip to Ukraine in 2002 to see if we might want to begin a mission partnership there. Mike had been involved in medical mission in Ukraine for about a decade at that point and had many rich relationships he felt would be fertile ground for a mission partnership.

We traveled to Kyiv, then on to Vinnytsya which is a smaller city to the southwest of the capital Kyiv. We formed a relationship there with The Church of the Risen Christ, which was a Protestant, evangelical congregation in the city doing many great ministries among the most vulnerable of that community. Their pastor, The Rev. Frederick "Fred" Ankai-Taylor, was originally from Ghana, had gone to medical school in Russia, met his Ukrainian wife there and then felt called to ministry. He and his wife, Lena, came back to Ukraine and started a church there.

By the time we visited, the church had several hundred members and were engaged in ministries with orphans, those in poverty, and those battling addictions of various kinds. After a wonderful visit filled with opportunities that seemed a good way for our members to be able to serve on a short-term mission trip, we came home to “pray over it.”

We determined it would be good to foster this mission partnership and have worked alongside them for nearly twenty years.

2003: We sent a team to Ukraine to serve and worship alongside The Church of the Risen Christ in Vinnytsya and surrounding areas. The team had a wonderful visit, did work in orphanages, worked with children and youth in the church, spent time with the rehabilitation ministries of the church, worshiped, and got to know a great deal about the life and culture of Ukraine.

2004: The IPC Foundation had been supporting a Pastoral Leadership program through the Haggai Institute and provided funding so that Pastor Fred could attend one of the month-long institutes for pastoral leadership training, which proved to be a very important opportunity for Pastor Fred. From the training he received there, he was able to come home and nurture the start of several new house churches in outlying communities of Ukraine.

2005: We sent a small team for a short visit to Vinnytsya to continue to build the relationship with Church of the Risen Christ and get updates on their plans for the building of a new worship center and a building to house their rehabilitation ministry.

In addition, Betsy Holloway introduced IPC to Teresa Filmon and her ministry called His Kids Too, working with orphans in the far eastern part of Ukraine. The IPC Foundation has supported His Kids Too with a number of grants over the years targeted to support their humanitarian assistance to orphans in the Donetsk region on the far eastern border with Russia—this is one of the contested regions that came under partial Russian control in 2014 and is now one of the regions Putin has recognized as “independent republics” within Ukraine.

2007: We sent a team to participate in a Summer Bible Camp with His Kids Too in Dzerzhinsk in the Donetsk region of Ukraine. The team’s living conditions were difficult but the ministry was very meaningful.

2008: We sent a team that went back to Vinnytsya and participated in that region with both Church of the Risen Christ and His Kids Too ministry opportunities.

Today: I have remained in close contact over the years with Pastor Fred and we maintain a warm and supportive community to this day. He has been in constant contact with me through Facebook Messenger and email throughout the current crisis, sending daily updates on their efforts to provide food, shelter, and other assistance to refugees fleeing Kyiv and other parts of Ukraine and either staying in or passing through Vinnytsya.

They are also assisting the elderly, disabled and orphans who cannot flee the country, and providing assistance to the hospital and the special police forces trying to protect the city. This congregation is made up of Ukrainians, Russians, and Belarusians, and they are also seeking to model forgiveness, reconciliation, and hope by maintaining their unity in the bonds of Christ and working together in ministries of relief and compassion during this very dangerous time.